Finding the Flumph or: How I Learned to Stop Being Critical and Love the Fiend Folio

Having heard all the jokes and continuous needling of the Fiend Folio (I’m looking at you DM Nick), I thought it was time to finally step up and defend one of the books that I use on a regular basis when creating adventures and why I love it.

I will begin this week with a bit of nostalgia on why I have a special place in my Heart of Vecna for the Fiend Folio.

When I was a young lad (about 8th grade) along with a friend of mine we tried to play D&D.  I had a Moldavay Basic set and a Holmes blue book, my friend had the Mentzer BECMI sets and neither of us knew what we were doing.  We read the books, but between the two of us we had never played with anyone else or even seen anyone play.  The worst part is we both wanted to be players, neither of us had even a passing interest in being a DM.

Our solution to this was to draw some random dungeons and fill them with the monsters best suited for our characters to kill and get XP and treasure from.  You would be surprised how fast you can level when you skip all role play and stock just the right amount of giants to beat on!

Well, this quickly wore thin and we kind of gave up with no direction to go. Then we had a new kid move into the neighborhood.  Turns out he had experience with AD&D and had played with some older kids. We quickly got together and began a campaign with him as DM.  My friend and I went out and bought the AD&D books (Players Handbook, Dungeons Masters Guide, and Monster Manual).  Being fascinated with not only the game but the genre in general we quickly absorbed every word of the three books.

Now being young and eager I will admit that this led to both some rules lawyering (from yours truly) from time to time, as well as using some player knowledge when facing monsters “hey that’s a troll, we need to use fire.” (We were kids, give us a break!)

At 2nd or 3rd level we ran into a group of creatures that when described seemed to be nothing more than some strange looking orcs, and that’s when it happened. Our DM pulled the Fiend Folio out of his bag.  (Now I have to stress at this time the only AD&D books that the local game store carried were the big three.  So, we had never seen the Fiend Folio and knew nothing about it or what it contained.)  Our party engaged these orc-looking creatures and proceeded to get beat down.  These were not your normal orcs, they were attacking twice, had better hit points, and they had better AC.  After a couple of deaths and a strategic withdrawal (running away) by the surviving characters, we headed back to town to lick our wounds. 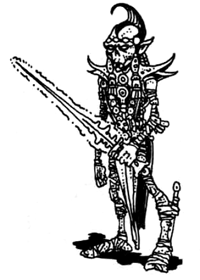 That was the beginning of our fear of the Fiend Folio.  Our DM did not use it all the time—most of the monsters we fought came from the Monster Manual—but when he did pull the book out it was always something new that would give us a major challenge, regardless of how high our level got.  Flail snails, lizard kings, slaads, githyanki, nycadaemons, they all gave us a good beating when we first faced them.  This led to us, the players, giving a collective groan when ever the book made an appearance. It began to hold an almost mystic quality in our minds of being a book full of ultra powerful creatures.

Now eventually this campaign would end (after about 4 years) and I would move on to put together my own group and campaign where I was DM.  One of the things I did was go out and eventually find a copy of the Fiend Folio of my own, and I used in much in the same way as my old DM.  I would pick the toughest appropriate monster and put it against the party from time to time.  My group had the same reaction we used to (since they did not have a copy) and eventually when I would pull the book out and wave it around they would have a chill run down their spine.

Now I realize most of the perception I had of the Fiend Folio was because of the unknown factor, when you only speculate about something you oft times give it qualities it may not in actuality have.  Regardless, however, it has always left a lasting impression on me.

Anyway, enough of the reminiscing. It’s now time to take a closer look at what the book does contain and even attack some of the common misconceptions of why some despise it.

The biggest complaint I hear about this classic tome is that there are too many useless monsters.  Now, first of all it is my honest opinion that there are very few monsters that ever made it to print that are worthless.  Some of the creatures are more difficult to fit into a scenario, but that in no way makes them useless.  For instance, the flumph, perhaps the most maligned creature of in all AD&D, it is hated because of its looks and abilities.  Really, though, it looks similar to a jellyfish, and squirts a foul smelling substance like a skunk (and not even from its rear).  How anyone could condemn the idea of such a creature but at the same time support a creature that looks like a sickly gray, skeletal-bodied, enormous headed platypus that can “eat thoughts” and remove intelligence permanently is beyond me.

When not referring to creatures as useless, people will try and claim they are “dumb”.  A pretty ubiquitous statement, just because you don’t like a monster doesn’t mean it has no value in a campaign and in no way impacts the usefulness of the book in question.  A creature from the Folio which gets the “dumb” tag is the flail snail. 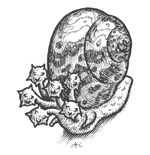 Why?  The general answer is because it has heads are shaped like a weapon, but how is it any more “dumb” or silly than an intelligent sting ray with big fangs that casts cleric spells?  This is supposed to be a game of fantasy, a game where crazy wizards are constantly experimenting with creating new and different life forms, so why wave off something wild or weird?

As for the Folio having a higher number of these so called “useless” monsters, again I challenge the assumption that they are useless.  Just about every campaign has somewhere that any given creature can be worked in, all it takes is some imagination.

That leads me to something that others may see as a weakness, but I see as a strength of the Fiend Folio.  Many of the creatures within are given very little detail on ecology.  Like the aforementioned flumph, a description is given, its abilities are listed, and some common reactions, but we are never told how they live as a group, or where they are commonly found.  A great many of the creatures in the Folio are presented the same way, and I for one love this as it allows the DM to use their own imagination on where these creatures best fit in their campaign.  Now, while even the more complete descriptions in the Monster Manual should not discourage a DM from adjusting the creatures within for their world as they see fit, those same descriptions do put preconceived notions in our mind.  I find the less detailed monster entries the perfect place to let my mind work and create something original for my own campaign, and it is no coincidence that when I write ecology articles I start by looking for a creature without to much description so I can expand upon them.

The primary comparison is always to the Monster Manual. People complain that the Fiend Folio falls short of this iconic book.  I feel this comparison is completely unfair.  The Monster Manual had the advantage of getting to hold the majority of base mythological creatures including, of course, the dragons and giants that are fantasy staples.  The Monster Manual is the easy book, the book that gets the free shots by default, so of course it is going to hold more of the revered creatures in the game since it got the first pick.  The Fiend Folio, on the other hand, is comprised mostly of completely made-up creatures or the leftovers from myth and fantasy.

Even with its distinction of being the first and having the pick of the litter, however, there are still creatures within the Monster Manual that are just as difficult to use, or uninspired, as creatures complained about in the Fiend Folio.  The difference is you don’t hear people complain about the Monster Manual because it isn’t the popular joke among the old timers (and that is my real theory, that most people complaining about the Fiend Folio are doing it because it’s “accepted,” not because it’s true).

I have heard a number of jokes about how silly the gorilla bear in the Fiend Folio is, but I don’t hear those complaints about the owlbear from Monster Manual. I find this very hypocritical.

People laugh at the idea of the goldbug and say it is useless— just something to screw with the PCs.  I guess those same people skipped over ear seekers in the Monster Manual.

I have already talked about the “silly” concept of the flumph being rivaled by that of the thought eater.

Now let’s look at some of the iconic creatures to come out of the Fiend Folio.

The drow – Even before drizzt (yuck) we had the GDQ series, and the Folio got the distinction of being the hardcover tome which housed them. 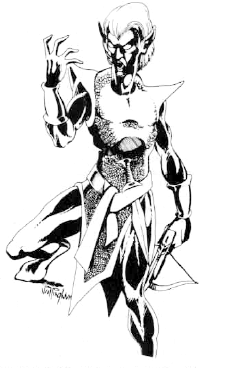 Death knights – Truly made famous in Dragonlance novels, these creatures are a treat for a high level party.

Githyanki – A powerful race that has grown more iconic over the years.

Nycadaemon and mezzodaemon – these two names appeared in the Dungeon Masters Guide before the Fiend Folio was even released.

That’s just a few big hitters, there are plenty of other well known monsters that appear in most AD&D campaigns that first appeared in the Fiend Folio.

Hook horrors, lizard kings, giant trolls, coffer corpses, Sons of Kyruss, caryatid columns, grell—those are a few off the top of my head that I would bet most people have either encountered as players or used as DMs.

Another useful option from the Fiend Folio is the additional humanoid races it gave us to spice up our games.  Let’s face it, you’re not fighting dragons and demons at low level, and orcs, goblins, and kobolds get boring after a while.  Luckily we have the Fiend Folio to give us a little spice.  Gibberlings, grimlocks, flinds, xvarts, and bullywugs all give us something different to throw at players.

So there you have it, I proudly declare I am a fan of the Fiend Folio, I use it in my campaigns, I use it in my modules, and I will continue to do so regardless of how many people laugh at it.

This week I am including an item that I created and which appears in the Tome of Minor Items—which can be downloaded on Dragonsfoot.  I named it after a PC in a campaign I ran for many years.

14 comments on “Finding the Flumph or: How I Learned to Stop Being Critical and Love the Fiend Folio”