Sethwyne looked out into the ocean, at the sunrise. Shivering knee deep in water, his right hand grips his spear all the more strongly. It was made from twisted wood from a land some to the east and tipped with the small iron point that had cost him a month of tax equivalent. In his left he held a small sack  seeping with the bleeding remains of fresh fish caught that morning.

The water parted quickly as Sethwyne headed into the abandoned island shallows. Around his legs he felt the kelp which would have been harvested had not been the reports. He stoped before the marker string, defining where the crops stop and where the water grows to deep to use in underwater farming. Now he could feel the cold morning water leaking down his mammalian skin water coats. Reflexively he tightened the various ties abound to hold his body heat.  Slowly he opened the bleeding bag and emptied its contents into the water before him.

Within minutes Sethwyne sighted the single fin he was waiting for. Immediately he assessed its size and determined that he is dealing with a young. He sighed, knowing that this small kill means little in terms of honor. As the creature drew closer Sethwyne readied his spear, aiming its point at the targets unseen mouth. Impact, Sethwyne stabed his weapon, despite the resistants of water, into the Sh’aruk’s mouth and up its soft upper mouth into its cranium. ‘I would be happier with this kill,’ Sethwyne thought, ‘if I wrist didn’t have a tooth shoved into it.’

Akar is plane of heroic knights, miserable shivering peasants, dangerous voyages, and the hope of a glorious reward. In this same world an adventurer can live his entire life knowing how to swim, yet still have it end in panicked drowning. For better or for worse, adventures take to the high sees: young warriors for glory, lame peasants for freedom, inspired holy men in their search for their god, or mages who wish to master the skills of water parting.

Narwhal knights are the most brave and loyal warriors across the seas of Akar. Each and every knight serves on his lord with care, hoping that one day his lord will see him fit to become a vassal, and trust him with land. By tradition, once a narwhal knight has land, he can legally take a wife. Generally no knight is given charge of more then three islands full of peasants. With more a fair tactician could easily betray his lord and establish his own kingdom, using the ocean as a shield.

Due to the lack of metalloid material found around about the islands, narwhal knights rely on more abundant material. Large amounts of fur are layered about for armor, and most weapons are made of wood, which itself is still rather uncommon.

Peasant individuals are rarely people of note, but in mass they are the social backbone of all the kingdoms(with the single exception of the great forest island to the far east). They provide the food necessary to feed themselves and their higher ups, as wells as pay for any war that might be occurring at the time. In these times of great strife ships of war might actually be built and employed; peasants generally loathe the alternate work.

Seasons of growing on Akar are similar to most other worlds. Planting of young crops is carried out during the early spring, and harvest is completed in the late fall. These time constrictions are considered more so, as all farming is done hydrologically and planting must be done before the high watered late fall. Because of this most peasant work is done in cold water. to counteract this peasants were fur almost universally and work in hour long shifts.

Only the most hopeless peasants ever even consider becoming adventurers. Out of these few, only about half attempt to implement the new lifestyle. Out of that half, none have returned.

In a world mostly dominated by oceanic activity, it only stands to reason that people worship personifications of the sea. Of these many, only two have spread in dominance above the rest. These are the cults of Mantary and Whaley, and are female and male deities respectively.

Mantary, Mother of the Sea, Lordess of Calm, was described in Calr Frasai, the well know founder of church of Mantary, in the third volume of the epic titled Water.

It is said that Mantary mothered all peaceful life in the sea, as well as the merfolk, have a more flexible a disposition due to their human halves. Priests of Mantary are chaotic or neutral in nature and never evil.

Whaley, Lord of the Storms, Father of Sh’aruk, is perhaps the most speculated on deity on Akar. He has few followers, most of which are the violent outcasts of society. There is no defining doctrine imposed on followers of Whaley, which is precisely why Whaley has no lawful followers. He is random and violent, much like the ocean can be. More so then other deities, Whaley chooses who he grants power to. All of those lucky enough to be chosen,become doomed to survived a shipwreck and have the vision. One must have had the vision to be granted power by Whaley. One man’s account of the vision is as follows:

His eyes stared at me, through me
I know but don’t match his gaze
I stare at his teeth, his teeth
He rolls the dice, staring through me
Wings spread from the man’s spine
He leaves me alone on this raft

Devote followers of Whaley are chaotic in nature and can never be good. 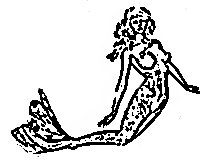 Much superstition surrounds the demi-human fish people of the sea. Very few can vouch to seeing one of these fantastic creatures, and those who ave often elaborate the detail beyond truth.

Their origin is speculated, but most prescribe to one of three theories: a, the deity Mantary fell in love with the well known historical knight Sir Malovich, or some other; b, they are the hideous creations of some unknown evil sorcerer; or c, overtime an isolated group of humans became attuned to the sea by natural selection, this is obviously the least prescribed to.

Trades on the Sea

On Akar prosperity is rare. Becoming a trader is perhaps the quickest route to a comfortable life. Ships are so expensive, that any beginning adventurer would have to serve under an established company. The majority of companies adventurers might join are centered in the east half of Akar, where the forest islands are located; this is where most wood is exported and money can be made.

Independent traders not connected with a company likely were endorsed by a local lord. With a debt to pay they would likely stay local, and make profit from standard fishing. Whaling on Akar can be incredibly dangerous if a ship and crew try to take on a beast they are not prepared for, and is the cause for a large fraction of ship wrecks.

The Price of Metal

To put it simply, metal is rare. To own enough metal to tip a spear is a sign of prosperity; only the greatest heroes have ever owned an entire weapon made from the substances. This is hope, however. Recent discoveries point to large deposits of all metals deep beneath the oceans surface. Two competing solutions have appeared to this conundrum: magic and science.

On Akar exist a unique sect of magic users, who devote their entire life to magic as it applies to the sea. It is well known that these sorcerers can not be hindered by any amount of water or drowning. The most powerful an hold enough water to transport workers to the underwater mines. These magicians are thought after enough that nobles often resort to using their daughter as a bargaining chip.

For the other answer we must turn to the brightest minds of this worlds century. All of these great thinks are unified by the Open Science Group, created t connect the most logicical minds from among the many isles. This group is based on the eastern forest islands, where there is much material to tinker with. They have developed wooden pods that transport men down, and mined material to the surface. These are expensive to produce and prone to catastrophic failure.