B4 – THE LOST CITY by Tom Moldvay 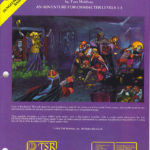 B4 – The Lost City by Tom Moldvay

I have hosted this module only a few times in the past 25 years or so simply on the premise that it is not one of my favorites as a desert adventure. It does lack some critical components to make it a fun desert adventure but that will be covered later on as I review it.

THEME: The basic theme of the module is that the player characters are travelling in a desert, eventually discovering an ancient, but abandoned (thus far) city, exploring a large mysterious pyramid, finding the underground city teeming with life, and encountering some very strange people of a dying civilization. The module’s introduction basically has it already set that the player characters are part of a desert caravan until a terrible sandstorm struck resulting in the separation of the player characters from the caravan. As the party travels lost through the desert, they eventually will come across the remains of an ancient and ruined city apparently devoid of any life except for the occasional desert reptile or insect. As the players explore the ruined city, they will find a huge pyramid that juts from the landscape and it beckons the players forward in which they will find a secret door that allows them entrance inside. As the party explores the interior of this 5-tier pyramid, they will encounter hostile monsters, deadly traps, and a bunch of factions of humans who can be friends or enemies of the player characters depending how they react to their presence. Eventually, as the players continue to explore the pyramid, they will find passage to the hidden city underneath the burning sands of the desert. The underground city is a special extended part of the adventure and it will be covered later on in this review.

NPC’s: As stated earlier, there are a couple of factions that reside within the pyramid. These factions are the dying remnants of the civilization that built the city in the desert and the city under the ground. The civilization of the Cynidiceans is explained briefly from its birth to its eventual decline. The fall of the civilization was preceded by the heavy use of hallucinogenic drugs/wines and the rise of a mysterious evil(?) cult that wreaked havoc among the citizens and the infrastructure of the city. The cult worshipped some horrible monster named Zargon and considered it some form of god of which they sacrificed human victims to it in horrible ceremonies. As the city on top of the surface begin to decline due to the chaos created by the cult and Zargon, invading barbarians attacked the city in its weakened condition and those Cynidiceans who survived were forced to retreat to the catacombs underneath the pyramid. From there, they lived in a huge cavern sustained by a large lake and underground vegetation. Eventually, the destroyed city was reclaimed by the desert and covered in sand and forgotten in the passage of time.

The surviving Cynidiceans lived for generations underground and begin to change in appearance due to lack of exposure to the sun. Their skin is very pale and they managed to evolve with infravision to see in the darker environment. When encountered, they are normally all the time wearing highly decorated stylized masks usually of an animal or a human face. They wear fancy clothes, pretty jewelry (cosmetic), and carry short swords. The use of the hallucinogenic drugs/wines is still very prevalent among the surviving but decreasing populations of Cynidiceans.

Each of the factions will have a different reaction to the player characters as they are encountered and there will be opportunities for the players to join a faction if they see fit to do so. The DM will have to really know how each faction will react to the players and adjudicate each scenario when these factions are encountered. Player’s reaction to the factions will vary as well but it can be handled in two different ways. When I hosted this module, I had the players learn some of the history of desert region they were in with a smitter and a smatter of ancient civilizations. Other DMs can just throw them into the mix with no knowledge whatsoever and let them role with their actions. Either way will do.

AREA MAP: The module is broken into three specific parts when it comes to the area where the players will be exploring. The first part is the half-buried ancient ruins in the desert. The second part is the huge pyramid on the surface in the ruined city. Finally, the third part is the underground city.

The ancient city on top of the desert is very easy to explore and not much detail has been given to it therefore allowing a DM to expound on it if he/she desires. The weakness in this module is that point alone because it more or less forces the players to head directly to the large pyramid where the majority of all the action is going to take place. When I hosted this module the few times I ran it, I created a decent sized ruined city with ruined and almost destroyed buildings. I allowed the players to explore these ruins as much as possible while fighting a few creatures here and there and finding some minor loot and such.

The huge pyramid is the meat and bones of the module. It is comprised of 10 tiers HOWEVER the module suggests only the 1-5 tiers as a normal adventure with tiers 6-10 being an expanded portion of the pyramid. The encounters on the first 5 tiers are simple to medium in difficulty but the encounters on tiers 6-10 are VERY dangerous and can equate into a TPK. A DM needs to be very judicious as far as how the players are to proceed on tiers 6-10.

The underground city is comprised of 19 areas. The players will encounter a variety of monsters in these areas plus the stronghold areas of the various factions that may be encountered by the players.

LENGTH OF MODULE: This module is not a short module. There are a lot of role-playing opportunities and that alone will certainly lengthen the time to complete the adventure. Back in the day when I hosted this adventure, my friends played on Friday nights and all day on Saturdays and it took them a good three weekends to complete it.

BOXED TEXT: This module comes with boxed text. Unlike most modules that have boxed text, it is imperative that a DM really read this module thoroughly anyways. There are a lot of unknown variables due to the number of factions that can be encountered in this module.

MONSTER GENERATION: This module has some critical issues missing or wrong with it as far as monsters are concerned. First, where are the desert monsters and/or creatures??? There are none. This was probably done so that the DM will force the players into the pyramid much faster than usual and allowing less time to get familiar with their surroundings. As a DM, I created my own wandering monster chart for desert encounters and allowing the players to explore the top part of the ruined city for a few days and nights. What is up with some of the monsters in the giant pyramid? The party will encounter sprites, white apes, ogres, killer bees, a giant gecko, and a few others that are very highly unlikely to be found in such a place like a pyramid in the middle of a desert. In the underground city, there are goblin and hobgoblin communities. Some of these things really did not make sense but a good DM will either roll with the punches or adjust by replacing some of the flawed elements as far as monsters are concerned.

SUMMARY: Overall, this is a good module. It serves its purpose well and introduces a lot of good role-playing elements not normally found in other modules. There are some good combat portions and with the extended adventure hooks, make it more a very challenging and deadly module. The desert environment is a fun place to adventure with many diverse opportunities both beneficial and dangerous to the party as a whole. The role-playing opportunities among the various factions will provide lots of enjoyment provided they are utilized properly. One of the better points of this module is the section that has a bunch of alternate options for the DM to use for reasons for the players to explore The Lost City. Plenty of opportunities and plenty of ideas presented in the module coupled with the unlimited imagination of a DM can make playing in this module a memorable event.