In the Game Mechanics segment, we talked about running combat in 1st edition. Everyone has their own approach within the rules that are given, and this is my own approach. I use a “segment of action” approach, where a lower initiative roll is better because the number rolled is the base segment that character begins their action on.

The first person to propose segment of action rules was Len Lakofka in Dragon #34 (February 1980), but I base my rules on Ronald Hall’s article “Who Gets the First Swing?” in Dragon #71. I don’t use his whole system – it’s pretty complex – but I do use the speed factors he calculated in order to decide how weapon speed affects segment of action. 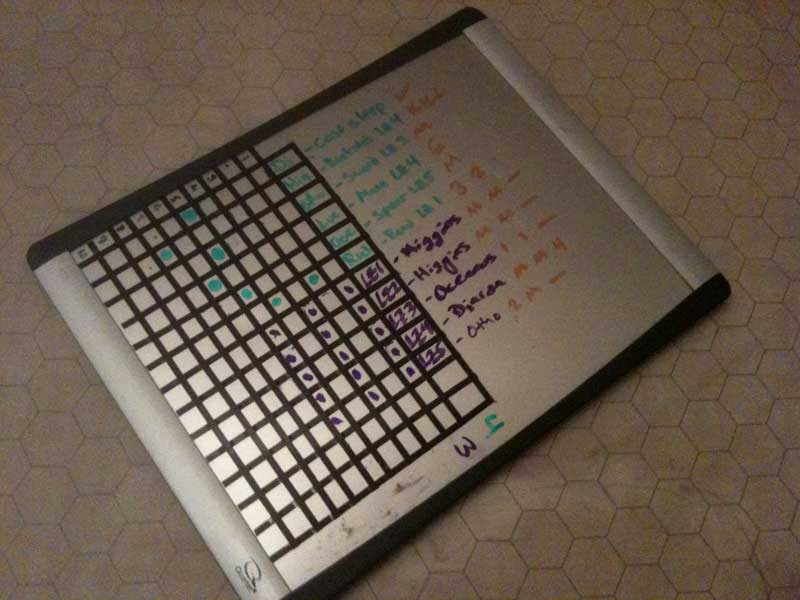 This is the battle board I’ve been using for some time now. I’ve since switched to paper, as I find that it’s quicker to flip to a new page each round than to wipe down the board. Others may prefer this whiteboard approach in order to save trees and ink (and setup time before the game).

The board I’m using is a Quartet dry-erase board that I bought at my local stationers, the Essex Card Shop. I couldn’t find another just like it online, it’s possible that this one has been discontinued. The closest I could come across was this Quartet iQ Dry-Erase Board

from Amazon. Anything like that should do the trick, most office supply stores will have something similar.

I marked the grid off with graphic tape, which I bought at Dick Blick. This item is a little harder to find than it used to be, as graphic tape was mostly used in the days of pasteup design, but here’s an Amazon link if you can’t find it locally: Graphic tape on Amazon 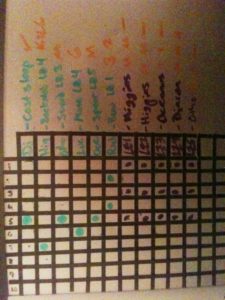 In the picture here, the party has come up against a band of lizard men. The party is comprised of Djaron, a Magic-User; Higgins, a Thief; Otho, a Fighter; Lucius (pronounced “lucious”), a Cleric; Oceanus, a multiclassed aquatic elf (Fighter/Thief); and Richmond, a Ranger.

On the right side of the board are the numbers “4” and “3,” indicating the initiative rolls for the party and the lizard men, respectively.

Along the top, above each character or monster’s name (lizard men are indicated as LZ1, LZ2, etc), you can see where I wrote the action each PC or monster declared, and the results of that action in orange at the end.

Here’s what happened in the round, and how I use the board to keep track.

The party and the lizard men came upon each other in a large cavern. Each rolled a d6 for surprise, and neither party was surprised. In the first round, the Magic-User cast Sleep upon the party of lizard men, the Thief chose to go around to try and backstab lizard man #4, the Fighter swung his broadsword at lizard man #3, the Cleric attacked #4 with his mace, the aquatic elf thrust a spear at #5, and the Ranger hung back to loose two arrows from his bow at the #1 lizard man.

The lizard men all attacked the party members nearest them, as shown in purple on the board. #1 & #2 attacked Higgins the thief, #3 went for Oceanus, #4 attacked Djaron the Magic-User, and #5 struck at the Fighter, Otho.

I now mark the segment each character’s action occurs on.

The magic user is casting a spell with a casting time of one segment. I add one to the base die roll of 4 for the party, and mark his action in segment 5.

The thief has chosen to move before striking, so I rule that it will add about three segments for movement before the blow can strike. A dagger is a fast weapon, so no penalty there. 4 + 3 = 7, his blow will strike in the seventh segment.

Otho’s broadsword is a slower weapon, adding one segment to his action, so he strikes in segment 5.

Lucius is using a mace which has an even higher speed factor (meaning it is slower), placing his attack in segment 6.

Oceanus’ spear is about the same speed as the broadsword, he strikes on segment 5.

The ranger, Richardson, gets two attacks with his bow, so I mark one early and one late – segments 2 and 4.

The lizard men have three attacks each – claw, bite, then weapon. With multiple attack routines, the party with the most number of attacks always goes first and last, with the other party attacking in between. So, I place their attacks in segments 1, 3, and 5 for each lizard man.

As this works out, the lizard men attack first, but the final attacks for most characters are happening simultaneously.

Now that I’ve marked the segments of action, everyone rolls to hit.

The first two lizard men miss Higgins – he slips by unmolested. The third lizard man hits Oceanus, but rolls only one point of damage. The third misses Djaron, and the fourth hits Otho for two hit points.

The lizard men’s next attack is rolled. Two more misses on Higgins, another hit for 1 hp against Oceanus, a miss against Djaron, and a miss on the fighter Otho.

Djaron begins his spell casting in the fourth segment. In the fifth, because he was not hit during the casting of the spell (the attacks were before he began, so even if they had hit it would have made no difference), the spell will take effect.

Fifth segment – the first action I consider is the Sleep spell. It affects four of the five lizard men, based on their hit dice. I rule that only lizard man #4 is unaffected.

Otho’s sword misses its target. Oceanus also misses with his spear. Lizard men #1, 2, 3 and 5 are put to sleep by the spell, so they won’t get a chance to use their last of three attacks for the round.

Lizard man #4, however, is not asleep, and hits Djaron for 4 points of damage. The spell has already been cast, so no interrupt occurs, but it’s a hard blow for the frail magic-user to absorb.

In the sixth segment, the Cleric’s mace finally connects, only now it is hitting a sleeping lizard man. The Player’s Handbook says that a creature affected by Sleep can be slain at will, however, since the action is so close, I rule that the Cleric would not have had time to adjust his blow accordingly. I do, however, grant maximum damage – 6 hit points.

Finally, in segment #8, Higgins has arrived at his stated backstabbing destination, only now his victim is magically asleep. In this case, I do allow him to slay his opponent as the spell description states, and rule his hit an automatic kill.